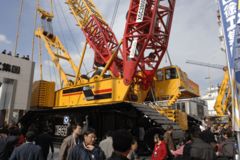 While tens of thousands of new truck cranes a year are sold in China there is big news at the upper end of the lifting capacity scale. Domestic manufacturers are also increasing production capacity and stepping up efforts to distribute and manufacture abroad. Alex Dahm reports

The next ten years promise a “golden age” for the crane industry in China, according to leading Chinese crane manufacturer XCMG. Speaking at the China International Crane Summit (CICS) in Shanghai, Sun Jian Zhong, vice president of XCMG, said China was on a fast track of urbanisation, with the proportion of the population living in urban areas having increased from under 35 percent 10 years ago to almost 48% now and likely to reach 53% by 2015 and as much as 60% by 2020.

From an economics point of view China remains cause for great optimism. Growth rates are projected to stay high at 8 to 10%, says Ted Plafker, China correspondent, The Economist.

A note of caution looking further ahead, however, is that the Chinese crane industry faces an increasingly competitive future as domestic production capacity grows and more foreign manufacturers enter the market, says Su Zi Meng, secretary general of the China Construction Machinery Association, also speaking at the CICS.

Su says that China’s growth, its membership of the World Trade Organisation and the subsequent lowering of crane import duties helped increase total sales of truck cranes from 5,000 units in 2000 to almost 27,500 units in 2009, increasing further to 27,570 in the first nine months of 2010.

This growth, however, creates problems, Su says, “As the Chinese crane market production capacity has been increasing at a more rapid pace and, since some enterprises are fixed on ‘generic’ products, market risk has increased.” China still represents a long-lasting market opportunity for crane manufacturers. “They face a precious opportunity for development but the market competition will become increasingly fierce,” Su says.

China’s domestic crane manufacturing capacity has expanded enormously in the past decade as demand for cranes has increased, says Xiong Yanming, Zoomlion vice president. As an example, Wang Hua Long, GJJ president, said that the company needs to dramatically increase its production capacity to meet the growing demand for tower cranes and hoists. GJJ will double the capacity of its three existing facilities in China and it is building a new factory in Tianjin, to be completed by September 2011, that will further double the total production capacity of tower cranes and hoists.

Manitowoc is planning to expand tower crane production at its Zhangjiagang facility in China. The tower crane market was around 17,000 units a year in 2007 and the same in 2008 but leapt to just over 25,000 in 2009, says Eric Etchart, Manitowoc president. John Wheeler, Manitowoc executive vice president for China, says Manitowoc remains very confident that the demand for tower cranes will be sustained in China.

Growth in the mobile crane market (wheeled and crawler mounted), according to Yanming at Zoomlion, has been strong. In 2003 less than 10,000 cranes were sold, generating a total sales value of less than RMB 5 billion (US$754 million) whereas, in 2010, more than 30,000 cranes were sold, generating a sales value of about RMB 30 billion ($4.5 billion), Yanming says.

David Phillips, managing director at Off Highway Research, a consultancy in the UK for research into and analysis of international construction equipment markets, reports that the domestic mobile crane market increased by 50% in the first half of 2010. The sales figure of about 20,000 units was higher than the total for the whole of 2008, Phillips says. “The Chinese market for mobile cranes now accounts for over 70% of global sales,” Phillips continues.

Phillips forecasts that the market for mobile cranes under 30 tonnes will soon be saturated, which may mean a decline in sales but they will stay at a high level and demand for larger machines will continue to increase. Sun at XCMG, says that 95% of the truck cranes sold in China are below 70 tonnes capacity.

In terms of market share for mobile cranes the breakdown for truck and all terrain cranes, according to Zeng Guang’an, LiuGong president and vice chairman, is roughly 51% XCMG, 27% Zoomlion, 6% LiuGong, 5% Sany, followed by Changjiang (Terex), Dongyue (Manitowoc) and others. For crawler cranes it is around 32% Sany, 26% XCMG, 21% Fuwa, 13% Zoomlion and 8% Yutong.

IC’s annual ICm20 ranking of the world’s largest crane manufacturers, published every November, reflects the huge growth from China. Four of the five companies showing higher sales in the 2010 table were from China and they are quickly displacing the established Western and Japanese manufacturers. Highest placed is XCMG at six, followed by Zoomlion at eight, up from 10th in 2009. Next is Sany at 11, up from 15th last year. Rounding out the top 20 is Fuwa at 19, up from 21st place.

While truck crane sales in China lead the world in terms of units, higher capacity new cranes is the really big news from the domestic manufacturers. Producing bigger cranes is a primary strategy of Chinese crane manufacturers, says Yanming Xiong at Zoomlion. In 2006 0.8% of crawler cranes sold in China were 300 tonnes capacity or larger. This increased to 12.49% in 2009, Yanming says. In terms of capability by lifting capacity this began with 200 tonne crawlers in 2002, increasing to the display of a 2,000 tonne capacity model in 2010 (see table).

It does not end there. Zoomlion has confirmed that it is developing a 3,200 tonne capacity crawler crane and it is not alone. In addition, Sun at XCMG confirms that a 3,200 tonne crawler is planned and under discussion for construction. Looking further ahead, Sany also already has a concept for a 60,000 tonne-metre crawler crane.

Yanming cautions, however, that Chinese manufacturers should not develop these large cranes too quickly, “Many companies are blindly pursuing tonnage, but don’t spend time developing their core technology.” He argues that it is important for domestic manufacturers to develop their internal technical know-how and the training capacities to support these massive cranes. “We are still imitating overseas manufacturers…we should lay good foundations before developing large cranes.”

A 2,000 tonne capacity lattice boom crawler crane was the highlight of the XCMG stand at the 2010 Bauma China exhibition in November. The XGC28000 is rated at 2,000 tonnes capacity at 14 m radius. Maximum load moment rating is 28,000 tonne-metres and the longest boom and jib combination is 156 m. Applications include nuclear power plant construction, wind farms and the chemical industry. On show was the first prototype and about six months of testing was scheduled into 2011.

Also notable in the crawler sector is Sany’s new 300 tonne capacity SCC8300. It is designed by a joint China-USA team for sale in US and other Western markets. Maximum combination length is 159 m. Transportability is a primary design consideration. The largest component is 45 tonnes and less than 3 m wide. Its self assembly feature means no service crane is needed for assembly.

Crane rental is also a growing trend in China but its development is hampered by a lack of knowledge of rental, the continuing culture for Chinese contractors to buy rather than rent, and unsophisticated rental management practices.

Li Hua Bin, general manager of Shanghai Jinheyuan Equipment Rental, one of the largest crane rental companies in China, said that crane rental is an immature sector impacted by low prices and a lack of acceptance, even in government; “When we invoice, it is categorised as ‘entertainment’. The government doesn’t have a clear understanding of crane rental services.”

Customers also need education about rental, “especially state-run companies. They just want to buy – it is the culture of the Chinese. It is not easy to change the mentality.”

Pricing discipline is also an issue, says Li, “Pricing is in chaos: some companies are not thinking about whether they are making money or a profit, and are only interested in getting equipment out on rent to pay back the interest on loans.”

Manitowoc has signed tower crane supply agreements with 10 Chinese rental companies and dealers. While the 12 month supply agreements are not a full commitment to buy a certain number of cranes John Wheeler, Manitowoc executive vice president for China, says that the agreements are “a good faith gesture of commitment between the companies.” One of the ten companies has signed an agreement to buy more than 100 tower cranes, all to be delivered before the end of 2011.

Increasing exports is one area of foreign expansion targeted by Chinese manufacturers. Zeng at LiuGong says that in 2008 the number of units exported was around 5,000 units, an increase of 57% over the previous year. The value of those exported goods exceeded RMB 8.2 billion ($1.2 billion) – an increase of 88% on the previous year, he says. In 2009, due to the economic crisis, exports decreased to 1,762 units, with a value of RMB 2.7 billion ($407 million) – a reduction of 64.7%, Zeng says. In 2010, however, exports picked up again. From January to August 1,275 units were exported and it was forecast that the growth would continue in the second half of the year to a total higher than that of 2009.

Many manufacturers have plans for expansion abroad. Sany has already been active in Germany, India and the USA. Another is tower crane and hoist manufacturer GJJ, which will establish an assembly facility in Dubai for hoists and tower cranes by the middle of 2011. The facility will also be used as a regional base for sales and rental activities.

The new Dubai plant is part of a global expansion strategy under which GJJ hopes to increase its sales to RMB 10 billion (US$ 1.5 billion) within three years. The majority of sales will still be from the Chinese market.