The blades of the world’s biggest wind turbine don’t just sprout from the impeller like leaves. And at 364 tons, you’ll need a pretty hefty crane – like the Liebherr LTM 11200-9.1. It’s is strong enough to lift three of them simultaneously.

The LTM 11200-9.1 is both the the strongest and tallest telescopic crane in the world, lifting up to 1200 tons (that’s 12 adult Blue Whales). Its eight-part telescoping boom extends up to 100m (15m taller than the last record holder) and, with the addition of a lattice jib, has a maximum lift height of 192m, more than 50 storeys high! Though, despite its 445,000 pounds of counter-weight, when the LTM 11200 is picking up over 900,000kg, it can only extend about 2.4m laterally without tipping.

The crane is powered by a separate 6-cylinder 240kW engine (in addition to the 500kW engine that runs the 20m, 9-axle carrier). Its 100-ton boom is as long as the truck itself and actually has to be shipped separately when moving job sites. Luckily, the carrier isn’t much wider than a normal big rig, which means that it can travel where other large cranes can’t – like into fields, where the wind turbines live. 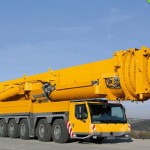 The Last Show. Did you watch it, or are you on it?