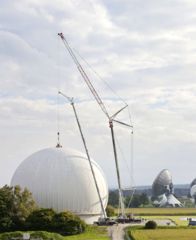 BKL used a pair of Liebherrs to help replace the skin of a 48 m diameter domed antenna in Germany.

The German Federal Post Office took the first parabolic antenna into operation at the earth station at Raisting, Bavaria in 1964. The then groundbreaking technology needed to be protected against wind and weather by a spherical air-supported cover, referred to as a radom – derived from the English words radar dome.

Almost 50 years later the cover had become porous, meaning there was the threat of it collapsing.  Crane services company BKL dispatched its 400 tonne capacity LTM 1400-7.1 and 100 tonne capacity LTM 1100-4.2 all terrains to the site. Liebherr helped in the planning stage to calculate the maximum wind strength at which the 400-tonner could still safely lift the 16 tonne cover, with its 1,000 square metres of surface area.

The manufacturer calculated a maximum wind speed of three metres per second. Three people were lowered onto the crest of the spherical membrane in a personel basket to assemble a 10-cornered metal retaining device. Holes were drilled into the membrane in order to tension the skin between the metal angle elements, which were then introduced, and the retaining device which had been placed on the outer skin.

Once the LTM 1400-7.1 had taken up the load, the membrane was cut away along the concrete base leaving some 5,200 square metres of protective skin hanging slack on the crane hook. The casing was then raised, and for the first time the huge antenna structure in the interior was exposed, as it was originally built under the inflated Radom.

The next day, as the new protective skin flowed over the parabolic antenna, a dozen retaining cables were let down from the personnel basket and the lifting stage to the people on the ground.

The cables were secured to the trailer couplings of a number of vehicles and then drawn taut following an unsuccessful attempt using 30 people to exert enough tractive force to widen the opening.

But the biggest obstacle in lowering the cover was the protective structure around the radio relay antenna. Only very careful and cautious raising and lowering of the load, precise slewing movements and plenty of manpower on the cables, allowed the new skin to be drawn completely downwards.

Some 320 bolts were then used to make the fabric airtight to the concrete base. It took just 20 minutes for the support air fans to fill the radom with enough air and re-establish the overpressure needed to guarantee the stability of the new air-support dome.