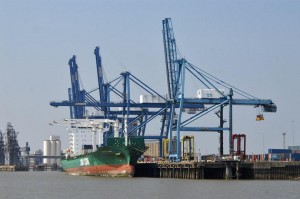 A crane operator died earlier today after the crane he was operating overturned at Tilbury Docks in the UK. We do not know what type of crane, but do know that it had an elevated cab and that it turned over onto its side.

The operator said to be in his 40s was thrown through the windscreen and was declared dead at the scene.

A paramedic called to the accident is quoted as saying: “When I arrived I was shown where the crane had toppled over onto its side. The driver’s cab is situated about 10 feet from the ground, and in this case the impact had caused the driver to fall out through the glass cab.”