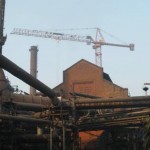 A project at a steel plant in India has benefited from the services of an old but unused tower crane resurrected to replace a blast furnace.

ABG Infralogistics Ltd was engaged by Tata Steel in Jamshedpur, India on a project to dismantle and replace a blast furnace.

Working area and access on the congested site were restricted. For the work ABG chose to use a large tower crane. The idea to deploy a tower crane instead of a crawler crane was discussed and agreed with P. K. Singh, chief project engineer at Tata Steel, and it has proved to be very beneficial, according to Saket Agarwal, owner of ABG.

ABG bought the large Krøll K1400 tower crane from manufacturer Krøll Cranes A/S in Denmark. Load moment is 1,800 tonne-metres, working radius at the time of writing was 60 m and height under hook was 80 m. The crane free-stands without ties at this height and has a 30 tonne lifting capacity all the way to the maximum radius. This allows it to handle all anticipated loads in the refurbishment zone.

Singh favoured the tower crane solution over the more traditional application of heavy mobile or crawler cranes, arguing that the ABG-Krøll proposal offered the best combination of lowest cost and most advantageous load radius solution. Application of a tower crane is highly unusual in India where large crawler crane solutions tend to be favoured and regarded as the norm in such heavy industrial applications.

The crane was installed by a team of engineers from Tata, ABG and Krøll. The confined and congested area presented a challenge to the team.

The Krøll tower crane has proven to be superior in performance to a crawler crane. It gives greater site coverage because of its vertical tower compared to an angled boom and it has a far smaller footprint at ground level, according to the manufacturer.

Used with permission from International Cranes and Specialized Transport