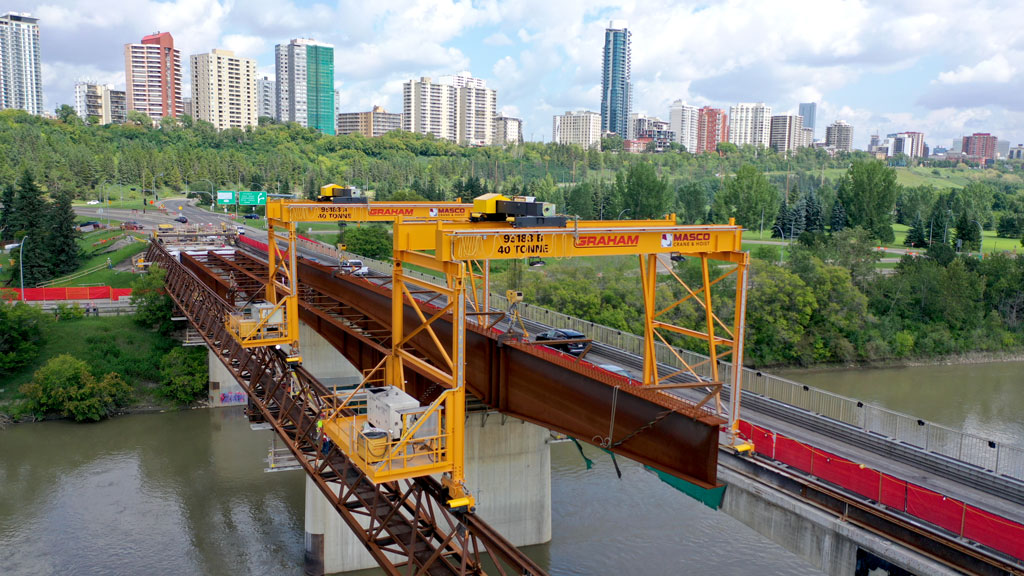 When Graham Construction won the $45.6 million contract to repair the Groat Road bridge in Edmonton, the team didn’t know they would need to use a technique never seen before in Canada to get the job done.

Graham was contracted to rebuild the Groat Road bridge over the North Saskatchewan River, a 330-metre-long, four-lane bridge built in the 1950s and reaching the end of its lifespan.

“It’s a critical transportation link between downtown Edmonton and the university area,” said operations manager with Graham, Stephanie Grundke, in an interview with the Journal of Commerce.

Due to the bridge’s importance and to reduce environmental impacts and costs, Graham was tasked with performing a major rehabilitation instead of building a new bridge.

“We went and did a full superstructure replacement and a fairly heavy rehab on the substructure. The majority of the abutments were replaced, some of the piles were kept and some of the wing walls and the piers as well.”

Grundke said the traditional technique of building berms to perform the work started to seem more difficult than usual as the team needed to keep traffic lanes open and could “only block 60 per cent of the river to allow the water to go through but also for recreational purposes.”

Add in restrictions surrounding fish habitats that meant certain work could only be done in the summer months and Grundke and her team realized the construction window would be severely limited.

“We found that was a very high schedule risk for the project.”

But with a creative team of engineers and staff, Graham chose innovation rather than risk missing deadlines.

“We decided to come up with this gantry crane idea that allowed us to do all the work from above,” she said.

The use of the gantry crane to rebuild a bridge structure was a first for Canadian construction companies.

Grundke said the construction team sawed the bridge in half lengthwise and brought in two 40-tonne lift gantry cranes, frequently used in tandem to lift 80 tonnes of material.

On the interior half of the bridge the gantries travelled on a temporary I beam connected to the bridge.

“We attached a truss to the side of the bridge, which was what supported the crane on the outer edge,” she said.

“The piers were tapered. We had basically a bracket on each side of the bridge. We did anchor these to the bridge piers and they were tensioned together as well using a threaded steel rod,” she said.

The team then used the gantries to systematically remove large swathes.

“We would go and cut the sections of the bridge deck between the girders and those sections were light enough for a single crane to go and pick them out.

“Then, once all the deck panels were removed in the section, we would bring two cranes and do tandem lifts to take out the girder pieces, which were quite heavy and many of them were near the capacity of the cranes.”

She said the novel nature of using the gantries took some time to get used to.

“There was definitely a lot of learning in the beginning, ironing out all of those kinks because it was something even new to us. But I felt it was a well-oiled machine by the end.”

She said it’s a great method to use for bridge rehabilitation.

“If you’re doing a new bridge build it doesn’t work well because you have no structure to attach it to. In this type of situation, if you’re keeping your piers and you’re just doing a superstructure replacement and the piers are close enough together it makes sense.”

Other difficulties Graham faced were dealing with the worn bridge to determine where it was safe to place heavy loads and rehabilitating the aged piers as well as refitting them for a more modern design.

Grundke said most bridges are built with fixed piers mounted with a bearing that allows the bridge to move and expand.

“The way that this bridge was designed, the piers were actually fixed to the bridge and there was basically like a hinge at the bottom of the pier. So, when the bridge expanded and contracted, it actually rocked the pier slightly,” she said.

“We had to go into the river and cast a concrete collar around that section to stop it from rocking and then (install a) bearing on the top that allows for the movement.”

All in, the use of the gantry enabled a less river invasive approach to construction, allowed the team to meet their deadlines and has introduced a new technique into the arsenal of Canadian bridge reconstruction.

Self Erect Crane Gets Emergency Service to Save the Day