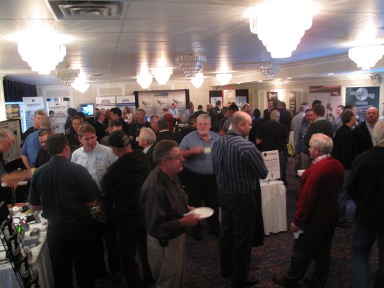 The inaugural Canadian Crane & Rigging Conference opened yesterday to a standing room only crowd. Crane professionals from all the western provinces and many from the United States attended the two-day event being held in Edmonton, Alberta. Most noteworthy was a strong contingent from the oil sands in Fort McMurray, Alberta.

The event is a partnership between Maximum Capacity Media, All Canadian Training Institute, and PEAK Inspection & Training and jointly sponsored by Columbus McKinnon and Continental Chain and Rigging. Maximum Capacity Media is the publisher of Crane Hot Line, Lift and Access, and Industrial Lift & Hoist magazines.

Mike Smith of Load Systems International, Quebec, the event’s lunch sponsor, was thrilled with the turn out at the premier event. “This event has been great and its only day one.”

Salespeople have questions. Jeffrey has answers.

Measuring the ROI of Social Media? There’s a Laugh, and a Joke.

Are you in the Social Media world, or on sidelines waiting,